If there is one thing I’ve learned this year (except from all the things I discovered about Milan of course), it is that organizing an Italian wedding is EXTREMELY stressful! The To-Do list is endless (compared to this one my 101-Milano-task-list looks like a joke) and every day new things pop up which we had never thought of before. Alex and I pass our days running, organizing and discussing and between ordering the “bomboniere”, checking the booklet for the Mass, stalking guests which still haven’t confirmed and hanging on the phone with hairdressers and caterers, we even find some time to be worried about the weather! Because even if the 14th of July is traditionally supposed to be a beautiful summer day with beautiful summer weather, after having watched liters and liters of water falling out of the sky in the last couple of weeks, we just aren’t so confident anymore.What we need is an extra portion of luck! And where could we better go to find it than in the Galleria Vittorio Emanuele? In the center of this Galleria, the architect Mengoni had a mosaic built of a bull with some very clearly exposed vital parts! Apparently he did this to make fun of the Milanese which he considered to be very cold and stiff people. But the Milanese weren’t that easy to offend and reacted to his provocation by putting their heels in the poor animal’s testicals every time they passed it. Some even started spinning upon them and spread the word that this would bring good luck to the spinner! And this is why even today, you can see rows and rows of people waiting in front of the bull to spin upon his balls! Today we were there to spin with them (sunny weather on the 14th of July, here we come!) and to film the energetic spinners who came after us! Enjoy!

Years ago, I was in Rome at a seminar dedicated to crime novels. At that seminar, some lady held a whole speech about the huge importance of the “non-lieu”, the “not-place” in crime novels. Not-places are places which do exist but are never taken or occupied by someone. That’s to say, places which you will pass or even stands in for a while but in which you would never stay or install yourself for a long time. Train stations or airports or the lobby of a hotel are good examples of this kind of crossing points. Places which are owned by everyone but at the same time also be no one. This lady told her crime novel loving audience that no crime novel could exist without some non-place playing a crucial part in it. If the non-place wasn’t used as the ideal location for the murder itself, it would at least serve as a meeting point for shady characters to exchange information or for the victim to leave a precious indication on who would have killed him. Thinking back of that interesting afternoon in Rome, I walked today to the Central Station of Milan. My guide book described the building as “definitely worth a visit” and I have to say that I agree. Gorgeous statues, hall ways, stair cases, galeries and mosaics turned la Stazione Centrale definitely into the most beautiful way to enter Milan (right from a train that is). For one hour, I couldn’t stop myself taking one picture after the other until some very brawny looking security people started to give me a real dirty look. When I got one of them asking me in a sharp-toned way what I was actually doing, I found myself answering before I knew it that I was examining this non-lieu to find some clues to the solution of my next Milanese crime novel. Since my answer didn’t sound very credible (or at least comprehensible), I took advantage of the perplexed reaction of the security guy to abscond from the Station. I had collected enough information anyways to know who would soon kill him in “Murder on the Milano Express...”! 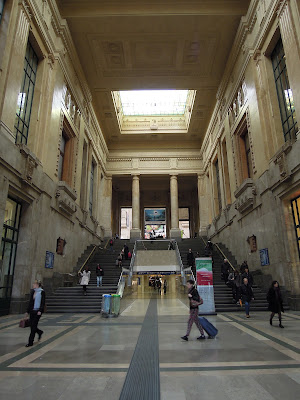 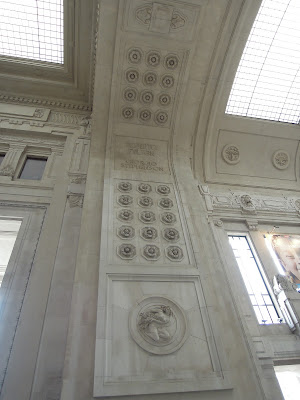 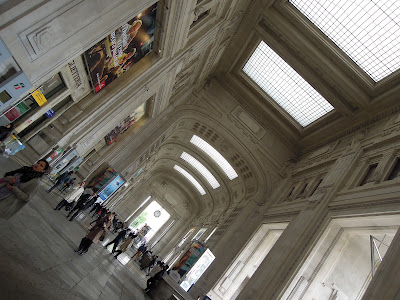 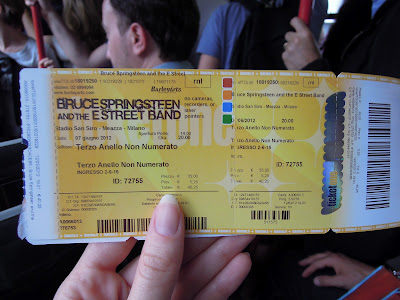 Bruce Springsteen is giving a concert in Milan. My darling is a fan and I have a Milano activity to fulfill on my 101-Milano-task-to-do-list, so off we go to San Siro. Even if I only know three Bruce Springsteen songs, miss out on our second salsa class in a row (I don’t even dare to think of how I’m going to manage next Thursday) and actually hate extremely crowdy events... But all right. Maybe it’s all for the best. Because many friend of mine has given me a look full with disbelief when I confessed never to have attended a giant concert in my life. Apparently people are supposed to dream of doing this every once in a while and are supposed to feel thrilled at the thought of standing in line or staying on the phone for hours and hours to manage to get an entrance ticket. When I tell people that I have never felt such an incontrollable concert urge, they stare at me as if I were some kind of alient and their eyes fill not only with horror but also with pity! As if I’m suffering from some strange and exotic disease or something!

But all this is part of the past now since I can now proudly announce to everyone that I have visited the San Siro stadium AND that I have attended a huge concert. You can see straight away that it’s my first time though since I immediately start taking pictures of all the trash that’s lying in front of the San Siro Stadium (what a dirty, dirty Bruce Springsteen fans!), untill Alessandro explains to me that people actually throw their bottles there because the security is asking them to. Apparently you can’t enter the stadium with a closed bottle of water. So either you throw your bottle in front of the feet of the steward, either you get rid of the bottle cap. Another thing I know now!

After entering the stadium, I have to admit that it’s all quite impressive... Waiting for The Boss to come the public starts doing big waves. I try to make a video of this massive choreography but then I see something more interesting to film! Right in front of my nose a couple of fans start a fight because some of them have decided to go and stand in front of some other – seated – Bruce adorers. Fortunately the whole quarrell gets solved right on time so that Bruce doesn’t have to sing in front of a bloodstained public.

As I told you guys before, I almost don’t know anything of the man’s repertoire which makes me a little bit less enthousiast than the people around me who go completely crazy, but I have to admit that Bruce has an unbelievable charisma and proves himself an even greater master in playing the audience than in playing his guitar (which he constantly throws away. Behind him. Over his head. Between his legs. And so on...). The guy gives himself totally to his public and just can’t be stopped anymore. Half an hour after having announced the end of the concert, he still stands jumping and singing on the stage while his fans get crazier and crazier. When he invites a little boy from the audience to get on stage with him and sing together, even I have to give in and melt for this great, great star. I have been to my first giant concert. And Bruce has one more fan... 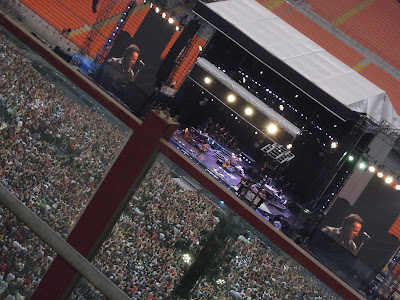 I am a Belgian Master in Gastronomy and I organize cultural and culinary trips and tours in Piedmont. Whether you're looking for someone to give you a general tour in Turin or whether you would love to visit a coffee roastery or winery or just take an Italian cooking class, I can organize it for you. Just contact me and let me know what it is you're looking for and how I can help to make your trip to Piedmont unforgettable!