23. Shopping with ancient Romans and medieval fellows! Only in Via Morigi! 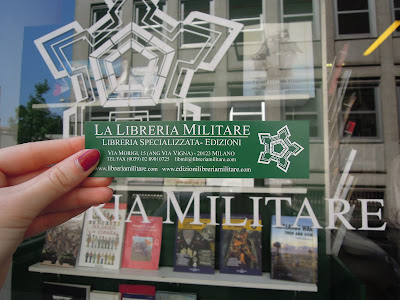 Today my guide book sent me to Via Brisa. The reason of this visit was the fact that Via Brisa is one of the few places in the city where you can find some remains of the Ancient Milan. I found what used to be an imperial palace of the 4th Century, took some pictures and was already ready to go when I spotted something interesting a little bit further: a nice little restaurant, a wine shop and a bookshop! This bookshop wasn’t just any bookshop. It was the Libreria Militare (the Military Bookshop). I imagined a shop full with war novels and a public of weapon loving soldiers, but I couldn’t have been more wrong! This shop is not so much loved by people from the military as it is by ancient Romans and medieval fellows! That’s to say by lovers of experimental archeology who are superpassionate about creating a revival of the past and need some manuals to do this in a scientifically responsible way! These guys need books about ancient clothes, ancient houses, ancient weapons and so much more and the Libreria Militare is having it for them! But Angelo and Federico – the very sympathic storekeepers of this highly original bookstore – have also thought about the women of their special customers! Imagine indeed that you have married a guy who is spending all his time on becoming the exact copy of an ancient Roman or some medieval character! Unions like this aren’t very likely to last if the lady of the house isn’t willing to jump in the historical adventure herself and participate in the whole archeologic enterprise! And how could you help these lovely ladies better than with a whole collection of historical cooking books! The Libreria Militare provides a whole bunch of them and many wife or girlfriend of some experimental archeologist found here the information required to prepare some delicious historically correct meal for their sweethearts! Federico visited some of the historical events his clients organize and tasted the roman dishes of their enthusiast egas. Result: he became even more motivated to find his customers the right material! The Libreria Militare of Via Morigi... Highly recommended I tell you! Whether you are a soldier, an archeologist or a cook!

I am a Belgian Master in Gastronomy and I organize cultural and culinary trips and tours in Piedmont. Whether you're looking for someone to give you a general tour in Turin or whether you would love to visit a coffee roastery or winery or just take an Italian cooking class, I can organize it for you. Just contact me and let me know what it is you're looking for and how I can help to make your trip to Piedmont unforgettable!